WordAds with WordPress. This is the easiest way to make money if you have a WordPress blog. Google Adsense is another way to make some money advertising on your blog as well if you do not have WordPress or even if you do it will work on this platform.

My main goal was to make back the money I put into this blog.

I pay an annual fee of around $100 to wordpress and I wanted to see if I could make this blog pay for itself by the year’s end. I also would like to find out if it is worth it for the average blogger? And what it would take for it to become worth it.

What I discovered instead:

The average blogger will NEVER be able to make “money” off of Wordads.

As an average book blogger who makes around 1000 views a month, this is considered  average in hobbiest blogger terms. But in reality, if you wanted to make this an actual workable income, this is not the way to go. At least, not yet.

To begin, I filled in all the info, visited my page, and saw the ads start popping up. My excitement began to fill.  BUT after the first 24 hours, I decided to take a look at what I’ve made so far. This was a whopping $0.00 with 0 ads being served. Well I wasn’t expecting much.

Finally, the website updated! Alright, so my blog doesn’t get many hits. Probably an average of 60 on a daily basis when I post. I MADE ONE PENNY TODAY! At least that’s what it says in revenue made (bottom right hand corner)!

I want to clarify that this is exactly what I was expecting. So the CPM means your viewers by the thousand. So right now I’m making for every 1000 viewers = $.08. Alright, going back to before where I mentioned I only made around 1K viewers a month? Yeah this estimates that I will make about $0.08 a month.

For 132 ads being shown on my own blog to people A DAY, I did not make anything in return. This seems to be a little unbalanced. But, let’s sit tight and see if these first day predictions are true to what is to come? 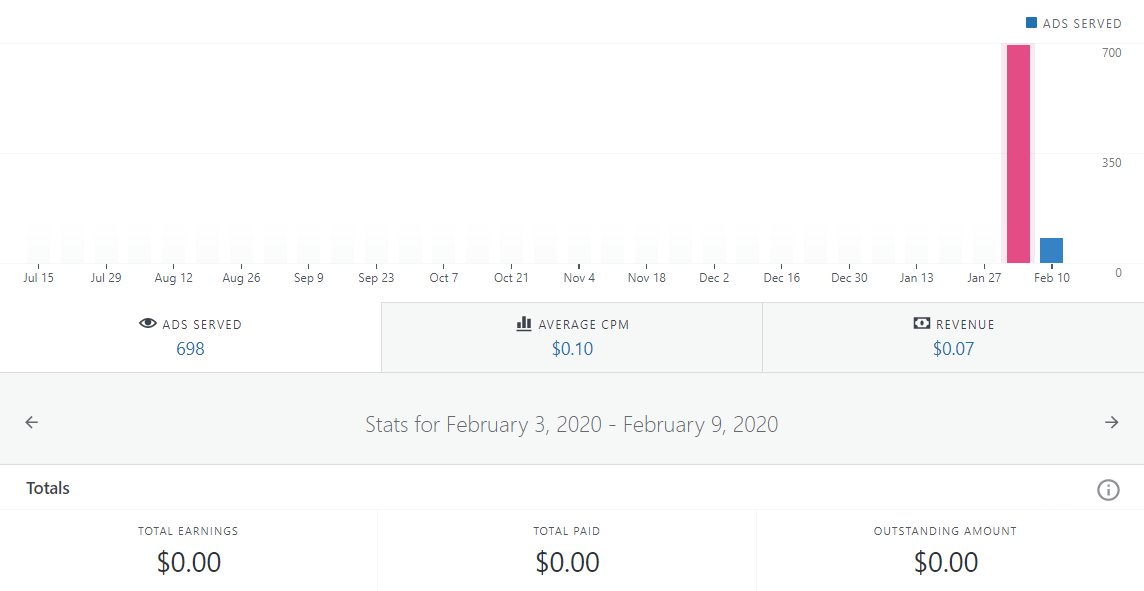 And this is one week later.

NOTHING. I earned NOT EVEN one penny. Now over 700 ads have been shown on my page and people clicked, people saw them. I allowed advertisements to be shown on my page for at least some sort of compensation. Now, I did this purely as an experiment so my bar was pretty damn low and I figured a penny a day, why the heck not? NOT EVEN.

I just feel that this is one giant scam to get blogs to advertise for dirt cheap. To get WordPress’ sponsors a way to get their name out.

Before I brought up having 10,000 views to be “worth it.” Using the above math, this would only be worth $1.00. If you even earn something that is.

Since apparently serving 700 ads is not even worth 1 penny.

In conclusion, this is NOT worth it for the average blogger.

If you are banging out that viewership with 10k views a month, than you get your dollar a month and you make that… $12 a year… Hold on. That still doesn’t sound right.

You mean to tell me, putting ads of other people’s products and opinions on my own blog (which I pay for yearly) is worth maybe $12 a year… I’m calling bullsh*t.

We need to start priding ourselves and work independently from the “Ad Money Makers.” We need to support each other and blurb other blogs and companies out on our own. Or find some way not be scammed by the likes of “Wordads.”

Scammed may be a little harsh as at least they are not taking something from us. Aside from airtime on our blogs and practically free advertisement with nothing in return. A little birdie has told me that Google Adsense may be the way to go in terms of money making, but not this one.

What do you all think?

Have you had a different experience with either Wordads or even adsense? Would you agree that it is time to move forward from being used by ads?

Let me know in the comments below~!

5 thoughts on “Is WordAds Worth it?”