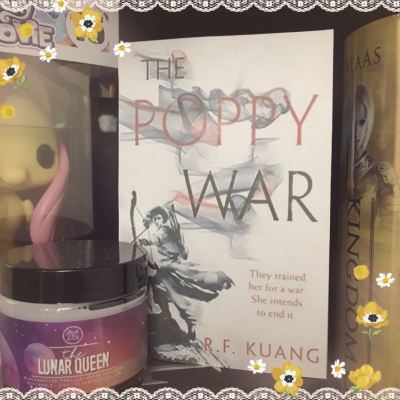 So, I found this when exploring the books I have on my Kindle (phone app). I have no idea how it got there but I’m not complaining. Just a warning: If you thought Girls of Paper and Fire was anything triggering, don’t even think about touching this book. There are quite a few graphic scenes in here that put that book to shame. If that doesn’t bother you, by all means enjoy this book because they are written superbly.

To introduce this novel, we begin with Fang Runin, or Rin as we call her. She is a war orphan who is forced to run an opium business for her foster parents. Her only way to escape is to join the highest ranking military school on a full scholarship. Succeeding this will be not only an entry way to an entirely different world but a way for her to discover who she truly is.

The war and politics were beyond confusing. For being such a big part of the book, we were suddenly thrust into a war I still knew nothing about. This book is a long book. With over 500 pages you are in it for the long haul with this one. I just hope you understand more about what is going on than I did.

Okay slight SPOILER but she is just randomly one of those people. Like she does as Jiang has taught her and suddenly she discovers who she apparently is? I thought she could use that because of what she was taught not because of what she is. This was a gigantic plot hole for me and just lost me half way through the book.

I loved Master Jiang. From the moment he was introduced I knew he would have a larger role. His character development was on point and in the end he really stayed true to who he was when first introduced. I really enjoyed that part of this novel and I hope you enjoy his character as much as I did.

But, going on to our main character, I loved Rin. She was so ambitious throughout everything. I felt her emotion through all of her losses and triumphs. She went through so much that she pretty much changed into an entirely different person. Also, there was no romance. No forced relationship upon us. Rin made many friendships though along the way.

The amount of action and events that happen in this book is enormous. I felt as if I had read two books in one. The second half is totally different from the first. But the things that Rin learns about the world and herself amount to incredible portions. Just know that this book is literally two book.

This book is one giant adventure. You’re in it for the long haul when reading this book so be prepared. Even though there is to me a second novel, you will be plenty satisfied with this one book. I hope you look forward to reading about these characters and how they fight against a common enemy.

Very similar to An Ember in the Ashes AND A Torch Against the Night.

“Slowly Rin removed the incense stick from her nostril.