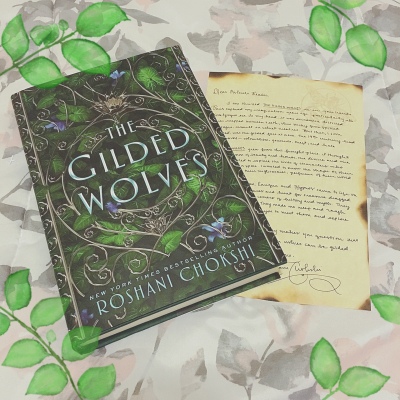 The Gilded Wolves stars five (almost six) unique characters who have found themselves in deeper trouble than they think. When the leader, Severin, finds a map that leads them to the legendary Horus Eye, the group learns they need to complete a series of heists in order to retrieve certain items. We follow Zofia, Laila, Enrique, and Tristan as they band together with Severin to steal the day. This team of unique individuals were entertaining throughout and I enjoyed learning about them. Just a warning, the ending has a totally unexpected and unnecessary turn that caused me to take this down a whole star.

For being so smart, Serverin makes some pretty dumb decisions. From bleeding all over in a heist to making spontaneous decisions that get them mixed up with the wrong people. Severin is supposed to be these teen’s leader. He brought them all together and now he is just cursing them.

I hated the ending. It just kept going. Two months later, two weeks later, on and on. The author just couldn’t decide on an ending and instead set up a second book and threw in the most random plot twist? Like that was totally unnecessary and lacked all of the emotions you would want with it. Let’s just say it was another Walking Dead fiasco.

I did love Zofia’s character. She is definitely a unique individual who showed that people follow along at different levels. It was representation that was finally written in a novel. Although, I feel she didn’t even get a proper end in this book. We just forgot about her character entirely and left her behind with a broken heart.

The heists were the best part. The planning and execution behind every heist was wonderful. Learning this mystery behind it all and figuring it out right beside them was enjoyable. I really believe the writing of these parts really made this book.

I really loved the twists and turns in this novel. Following the team and how they solved their mysteries was really fun. The ending brought this down a whole star, but other than that it might have been amazing.

A similar novel to this would be apparently Six of Crows (though I have never read this).

“‘…What’s the saying? Don’t put all the baskets on your head.’

Enrique rolled his eyes. “It’s ‘don’t put all your eggs in one basket.”‘

‘I hate eggs. I like my version better,’ said Hypnos.”