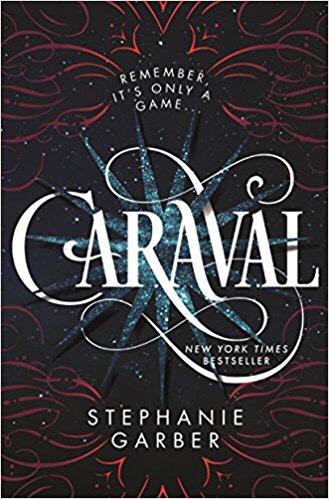 To begin, Caraval by Stephanie Garner has a strong idea but a horrible execution. The main character, Scarlett Dragna, finds herself mixed up in a game where things aren’t what they appear. With the help of some random dude, they try to find her sister Donatella.

I must say this book was one of my hardest reads to finish. The end had so many “surprise endings” that I just wanted to find the truth in the end and I still never found it. So much contradicts in this story it will have your head reeling.

* The author tried to get that wow factor right at the beginning by having the girls get caught by their abusive father. I found this a very shallow backstory to just throw right in the open

* The whole story revolves around Scarlett trying to save her sister but her own shellfish-ness keeps getting in the way with no explanation as to why??? She supposedly loves her sister so much but many times in the book this “love” is proven wrong. *SPOILER* Then in the end she manages to “wish” her sister back to life with the very love she was lacking the whole time??

* I hated Tella as a nickname and how it was used beyond dialogue and to describe the character. Donatella should have been used throughout the description

* The mystery of Caraval itself was the only redeeming part of this book. Trying to figure out what “magic” is being used and how it works was quite fascinating.

* I also loved that Scarlett’s dress changed with her emotions. That was a cool little snippet….

* I disliked the whole book. The backstory was quickly crammed into the intro and the romantic interest was not great. The ending felt smashed into those few pages with little actual truth being revealed. Just lie after lie with “twists and turns” being abused to the highest standard.

* Ultimately, I feel she only fell in love with Julian because she licked his blood and her body was attracted to him. That slight attraction for the first time made her infatuated with him. Blind love. He was actually a jerk in my opinion and I felt he just played her the whole time.

*This book was a 4 days work week read if you can stand the constant back and forth between boring and intriguing. I wish you the luck of the leprechaun if you wish to partake in this book. On amazon it was on sale for 2.99 for the kindle edition! (Now I know why)

Thank you so much for reading and hopefully the next book will be much better!

Obligatory Christmas post 🐶🎄
Someone wanted me to post something so I’m posting Beau-ber 🥰🥰🥰🐶🐶 . . . #beagle #pupper #dogsofinstagram #dogstagram
Here’s a selfie of me from a month ago ✌🏻
A magical day 🌸❤️
He makes me look good 😂😂
THEY HAVE ARRIVED! #thebookcon #bookcon #bookconvip